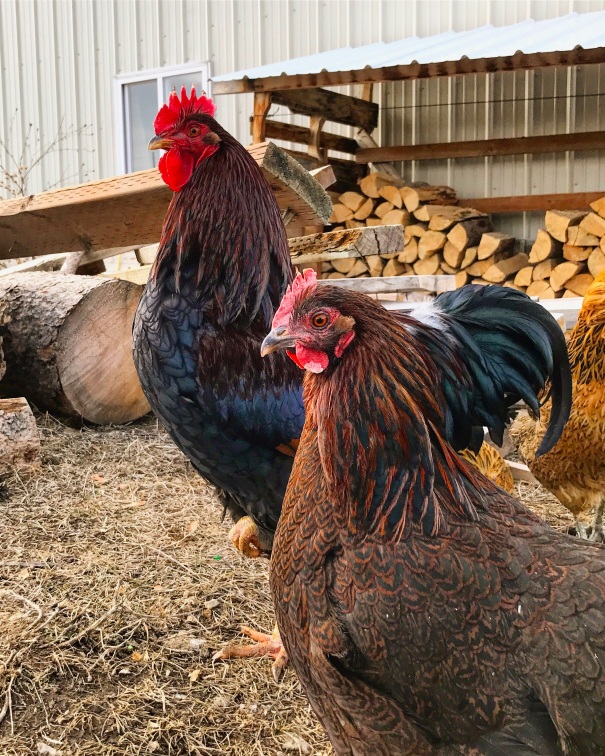 Some of you who follow me on Instagram will know that we’ve been having trouble with our rooster. Not in the attacking people sort of way, but actually attacking some of the hens in his flock. I’m sure even someone with no farm experience at all recognizes that this is a big NO NO.

We weren’t even supposed to have a rooster in the first place. Ironically, when we purchased our first flock of chickens from the feed store, we asked for three Partridge Rock chicks (supposedly all sexed as pullets) and the girl gave us four by mistake. I am CONVINCED that the extra little bird that made it into our box grew up to become Rooster Cogburn. Once he started crowing, we honestly weren’t sure what to do with him, so we decided to let him be and see how he performed his duties.

At first, you couldn’t fault the guy, except for some rough breeding here and there. Our hens free range the entire day, so having a lookout out in Big Sky Country is really an asset. Foxes, birds of prey, coyotes, skunks, coons, eagles… you name it, we’ve got it. I’ve even heard first hand accounts of eagles flying off with juvenile goats! Any time there was trouble- either from the skies or from surrounding fields, he would call his ladies in and get them under cover right quick.

Then, in autumn, the mating rituals started becoming more and more aggressive. In his zeal, whole crowns of feathers were being ripped from the hens, and I started considering culling him more and more seriously. Then winter came, and with the excrutiatingly cold temperatures, minimal sunlight, and non-existent egg production, he seemed to mellow out, and I was lulled into a false sense of security.

But then, once things began to thaw, and eggs began appearing again, this began happening:

This is Freddie, a quiet and meek Jersey Giant hen. She and her Black Star buddy started getting the  ol’ beatdown from Rooster for no apparent reason. At first, it was just pecking, but then it escalated to this. He chased her and her little friend out of the flock entirely. And this wasn’t even the worst of it. Things once again weren’t looking good for Rooster. No matter how good he is at his other jobs, we can’t allow ANYTHING like this go on.

A week ago, while my husband was out dropping his mom off at the airport, I heard screaming out behind the house. Thinking a fox had come into the yard, I dropped what I was doing and ran out the door to find Rooster standing on Freddie’s neck and ripping at her comb with his beak. I had one of my boots in my hand- being the first thing I grabbed on the way out the door- and I hurled it at him (quite impressively, I must say) landing a solid hit on his now retreating -and loudly squawking- form. Freddie ran off to hide, and I sent a very angry text to my husband, letting him know that Rooster had just unquestionably sealed his fate.

That night, once everyone was in to roost, and nice and docile, I hopped into the coop to kidnap him. (That’s really what chicken related night-ops feel like.) He spent the night comfortably kenneled in a very large dog crate, on a nice, thick bed of straw. The next morning, we collected him and he took the long walk (or in this case, the long carry) out to the processing station. We told him we were sorry it had to be this way, but he was lucky he got to stay as long as he did. He went into the cone and the deed was done.

My husband got to butchering, and I started looking for recipes.

It turned out that none of the recipes was exactly what I was looking for, so combining a few different ideas on how to tenderize an older chicken, along with  different recipes for Grandma’s scratch made chicken soup and my own ideas, and probably some random things I saw on an episode of Diners, Drive Ins and Dives, I worked out a process and a recipe that I thought would work for us. What resulted was seriously the most delicious, most flavorful chicken soup I’ve ever eaten. I’m calling it “Rotten Rooster Soup.”

Click here for a printable version of the recipe: Rotten Rooster Soup

After your bird has been butchered, allow it to age (covered, but not sealed tightly) in the fridge for 4-6 days. This is especially important when cooking an older, tougher bird.

Once the bird has aged, cut around the leg joints so that you have three large pieces, place all pieces into the crockpot, cover with water, and add a hearty sprinkling of salt. Cook on high for several hours, until meat shreds easily with a fork. (You could also do this on the stove, if you’re available to keep an eye on it.)

Remove the bird from crockpot and allow to rest long enough that it is cool enough to handle. While it’s resting, take the liquid from the crockpot and run it through a fine mesh strainer to remove the funky little bits, into a large stock pot. Bring to a simmer.

Once the meat is cool enough to work with, you can shred it up into bite size pieces for your soup. Use a fork or your fingers, whatever you prefer. I used a fork on the large surface areas, and my fingers to do the legs and to get into the weird little nooks and crannies. Be sure to check the meat for odd or especially tough bits as you’re shredding it. Remember that this is a rooster, and roosters have a reputation for being tough and gristly. If you have a dog, this is a great opportunity to share. I was pleasantly surprised about how much of the meat was not only usable, but really nice and tender.

Once all the meat is shredded, it goes into the pot with the simmering broth. The leg bones also go into the pot in order to impart even more delicious flavor.

Slice the carrots and the entire bunch of celery (except the leaves). I sliced both relatively thick (about 1/8”) because I like my soup more rustic. Rough chop the onions. Remember, everything will soften quite a bit while it’s cooking, so take that into account when deciding on how large to make your pieces. Add all the veggies to the pot.

Take small clusters of the fresh sage, rosemary, and thyme, and tie them together in a bunch with a length of twine or string. (Tada! You just made a super fancy bouquet garni.) Add to pot, along with the bay leaves.

Bring soup back to a boil, and then reduce to a simmer. Continue to cook for two more hours.

If you’re going to add noodles, you can throw them straight into the pot to cook with the soup, about 15 minutes before serving, but be sure to add more liquid to compensate for what the noodles will soak up. I chose to cook mine separately in half canned chicken broth and half water to impart that “chickeny” flavor into the noodles, but not use up the beautiful stock in the soup. It worked out nicely.

Remove your bouquet garni, bay leaves, and leg bones. Add salt and pepper to taste (it’s a big pot of soup, you’ll want to be pretty liberal), and serve that delicious rooster goodness.

To place a local farm fresh egg order or to ask any questions, please email us at pastures.and.pine@gmail.com