Tuesday, we backpacked back up to Camas Lake for an overnight camping trip. Since we already told you aaaaallll about Camas Lake in this post, I thought maybe it would be overkill to add another post about it, but we had so many beautiful pictures! So instead of me rambling on and on about things we’ve already told you, this will be more of an “Our Trip in Pictures” kind of post. Look for a new post all about our camping/backpacking gear later this week. 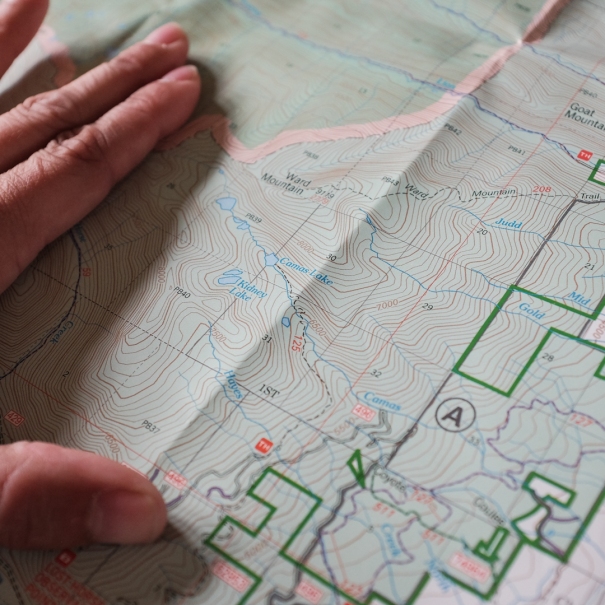 Backpacking In & Setting Up Camp 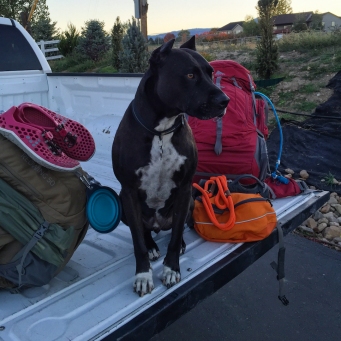 FYI the dog rides in the cab. 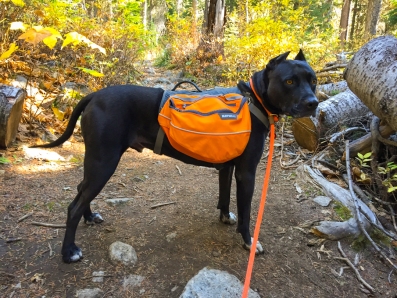 and he freaking sleeps in the dirt anyway. 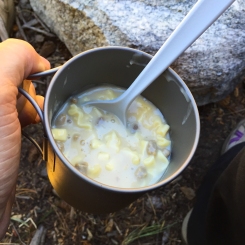 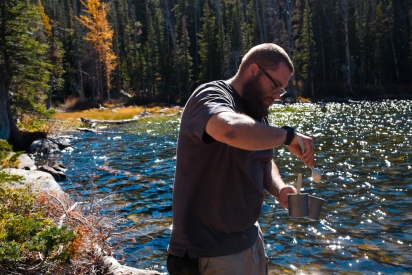 Adding filtered water to the Platypus via a quick change valve and the Sawyer Squeeze Filter system. 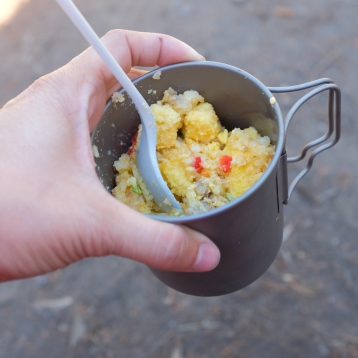 Discouraging bears by hanging our food high in the trees, far from camp.

There is one new thing about the trail I feel might be helpful to point out. A notable guide book to the Selway-Bitterroot Wilderness informed us that there was a spur trail up to the hidden Kidney Lake, and noted that it was well worth the 500 foot climb to see it. One of our goals when we backpacked up here was to hike up and check it out after we’d had time to rest. We were not able to locate this trail ANYWHERE. We combed the last quarter mile of the trail looking for this little offshoot to Spur Lake, but to no avail. Maybe others have been luckier than we were, but we spoke to another pair of hikers early the next day who had also been unable to locate it. Methinks the book might be a little out of date.

Additionally, the tome mentions that there are several lakes with campgrounds above Camas. It does mention that these are difficult to reach. Frankly, I think they would be near impossible to reach. There was so much deadfall that the path we had been following basically blinked out of existence less than a quarter of the way around the lake. Maybe more experienced mountain persons than we (who aren’t hiking with a medium/large size dog) would have less trouble, but we found the terrain to be nearly impassable, and gave up once it became clear that there was no way Diesel would be able to make the scramble. 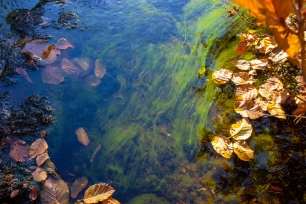 Or rather, dirt bathing. 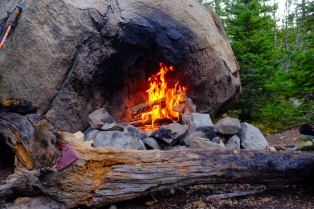 Discouraging bears by hanging our food high in the trees, far from camp. 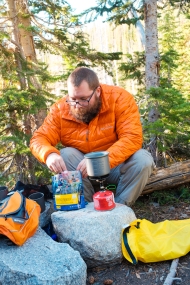 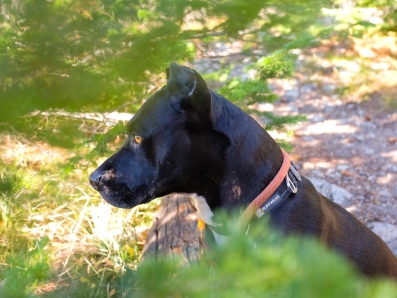 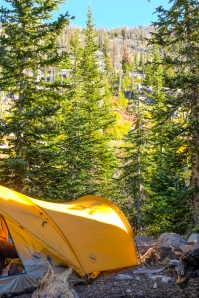 Altogether, this was a peaceful and beautiful trip. The basin is absolutely lovely, and we didn’t have any issues with the local wildlife. In fact, the only wildlife we actually encountered were squirrels, mice, and chipmunks, plus the odd bird here and there. I’ve seen pictures of moose and elk up there as well, but to our dismay, we didn’t observe any ourselves.

The climb is a little rough, and requires far more effort and frequent breaks when hauling 30-40 pounds of gear on your back. If your pooch carries a pack, be sure to bear them in mind as well, and water them frequently at stops. And for the love of God, please watch your footing on the way down. Your balance is completely different with a fully loaded pack. Never take for granted that your footing is stable. Just ask the nasty scrape down the side of my ankle.  😉

To place a local farm fresh egg order or to ask any questions, please email us at pastures.and.pine@gmail.com

Dark eggs with heavy blooms aren’t really a thing that ever happens around here, but one of our Marans has been dropping one here and there, and I really wish she’d do it more often. 😍 (Plus another one of Zola’s purple speckled Olive eggs!)
Zola, my crested Black Olive hen, lays the most spectacular light olive egg with PURPLE speckles! I’m absolutely obsessed and can’t bring myself to eat them! 😍
Changed up the labeling on my minis, and I have to say, I’m kind of in love. 😍
We were so busy last year that we didn’t do a garden. As a result, we didn’t get to can at all and now I’m feeling the loss. I could really go for eggs in purgatory right now. 🤤
Nest box pretties. 🥰
Myrcella (aka Mercy, Mimi or Mini) wasn’t originally on my keeper list. A product of a contraception mishap (doh. 🤦🏼‍♀️), she is not only from a brother to sister breeding, but a breeding of TWINS. (Hence the name. Any GOT fans out there?) But she’s sweet as pie, loves a good cuddle, and as she’s growing out, she also appears to have picked up all the right physical traits from her parents, including a super rad and uncommon bezoar paint job (I do love me some wild type patterns!). She also has weirdly tiny horns for an 8 month old, but they give her a perpetually babyish look, and that’s alright with me. 😁 (pardon the missing hair on her snoot- they rub it off on their feeders. 😬)
And I think to myself... what a wonderful world.
Little Hennessy. Can’t keep her away long enough to get a good picture. 😂 Henny aka Tiny, loves giving kisses and being carried around while you rub her belly. She’s nine months old now, but still thinks a squatting human makes an EXCELLENT jungle gym. For some reason, I don’t think she’ll ever grow out of that. God have mercy on us all. 😬
His handsomeness, Ser Terence. I sacrificed Moosh’s dignity (front) for this very flattering photo of Big T in the background. 😂